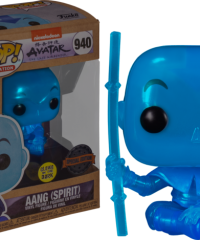 Since premiering in 2005, Nickelodeon’s hit series Avatar: The Last Airbender has gone on to earn critical acclaim from fans worldwide.

This Pop! features Aang, the last surviving Airbender, a monk of the Air Nomads’ Southern Air Temple. He is an incarnation of the “Avatar”, the spirit of light and peace manifested in human form, and here he comes in his “spirit” form!

Not only that, he boasts a stunning Glow in the Dark finish and comes packaged in the exclusive “Earth Day” packagaing.

This may very well be the ultimate Aang Pop! Vinyl Figure, so be sure to add him to your Funko collection today!

Be the first to review “Avatar: The Last Airbender – Spirit Aang Glow in the Dark Pop! Vinyl” Cancel reply