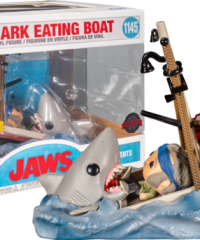 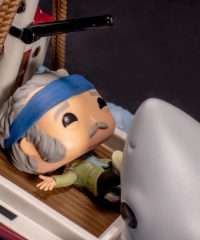 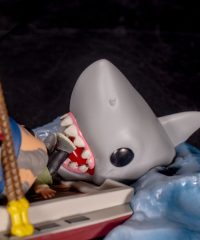 You’re gonna need a bigger display case now that Funko have released their terrifying new Jaws  Movie Monets Pop! Vinyl Figure, which is sure to delight any fan of the 1975 classic.

Jaws is a film that changed Hollywood, terrified audiences and earned its rightful place in pop culture legend. Set in the fictional beachside town of Amity Island, Jaws follows the story of Chief Brody and his dilemma of trying to protect his residents from the horror of a giant great white shark that’s wreaking havoc in the bay.

This stunning new Movie Moments Pop! showcases the moment the Great White Shark takes matters into its own hands and attempts to literally take out Quint’s boat ,”The Orca”, itself and poor Quint meets his demise.

It may not be safe to go back in the water, but it’s certainly safe to say that the new Jaws Movie Moments Pop! Vinyl Figure is an essential addition to any true film buff’s collection.