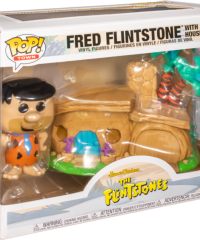 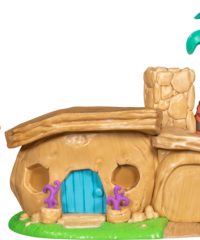 How can you see The Flintstone’s iconic home and not immediately start singing that timeless theme song? It’s impossible!

Ever since their debut in 1960, The Flintstones have been a household name. As the first animated sitcom, the modern stone age family shaped pop culture, and their popularity continues to this day! The series followed the usual sitcom storylines while justapositioning modern everyday concerns in a Stone Age setting.

The head of the family is Fred Flintstone, an accident-prone bronto-crane operator. Though quick to anger, Fred is a very loving husband and father. Fred is no stranger to the Pop! Vinyl world, being the very first Pop! released under the Pop! Animation category.

This new Pop! Town truly is a fantastic piece, as it finally gives these OG Funko legends a home! The house is so beautifully recreated, you can basically hear Fred shouting “WILMAAA!”

Without question one of the coolest Flintstones Funko releases, you’ll be sure to have a Yabba Dabba Doo Time!